Porque Brasil es tan caro? - Why is Brazil so expensive? 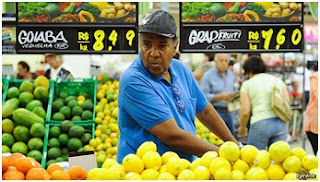 TRAVELLERS have long known that the richer a country, the more likely a visit is to burn a hole in their wallets. A recent survey by Tripadvisor, a travel website, put Oslo, the capital of super-rich Norway, as the world’s priciest destination, with a one-night stay in a four-star hotel with dinner and drinks for two costing more than $600. But near the top of the sticker-shock rankings is a surprise entry: upper-middle-income Brazil. Hotels in São Paulo, the business capital, or beachside Rio de Janeiro, cost more than in London or Zurich. Visitors who go window-shopping will find the high prices hit locals too. Clothes, cosmetics, electronics and cars are all more expensive, sometimes much more, than in most other places. The Economist’s Big Mac Index finds Brazilian burgers are dearer than everywhere else except in three much richer countries, (Norway, Sweden, Switzerland) and one dysfunctional one (Venezuela). So why is Brazil so pricey?

A special report in this week’s issue explores the question in more detail. A big part of the answer is currency appreciation, caused by economic stabilisation in the 1990s and a huge increase in commodity exports since then. A decade ago a dollar bought 3.5 reais; it now buys less than 2.3 reais—which understates the scale of the change, since Brazil’s inflation was much higher, so reais should have become cheaper, not more expensive. For Brazilians, though, currency appreciation has actually made life cheaper by cutting the price of imports. They point to the fabled custo Brasil (Brazil cost), as the country’s value-for-money problem has long been known. IMF figures show that in most poor and middle-income countries, money goes further than market rates would suggest because wages are lower and non-tradable goods are cheaper. A Mexican’s spending power, for example, is 45% higher at home than if he bought dollars and shopped across the border. But a Brazilian can buy little more at home than he can in the United States.

The custo Brasil has many ingredients, including high taxes (36% of GDP, way out of line with the 21% average for upper-middle-income countries), swingeing import duties and rigid labour laws that make it hard to use workers efficiently. Poor roads and a limited rail network push up freight costs. High interest rates mean firms must spend a packet on financing; high crime adds heavy security costs to their overheads. A terrible education system makes Brazil the world’s second-hardest place for firms to find the skills they need, according to Manpower Group, behind only ageing Japan. Soaring labour costs, which have doubled in a decade as big hikes to the minimum wage set the tone for pay negotiations across the board, have added a new ingredient to the old recipe.

Big price differences mean imports are increasingly taking market share from locals and even Brazilians of relatively modest means have taken to stocking up on foreign shopping-trips. A recent weakening of the currency will give local manufacturers some breathing space, but in the long term the only solution is to become more efficient. The World Bank’s annual report on doing business in a range of countries reads like a productivity to-do list for Brazil: make it simpler to start up and wind up companies; cut and streamline taxes; increase domestic savings and investment. A recent study by the Boston Consulting Group estimated that three-quarters of Brazil’s growth in the past decade came from adding more workers and only a quarter from productivity gains. With few more workers to add, the only way Brazil can start to grow once more is by using the ones it has much better—and becoming cheaper again.