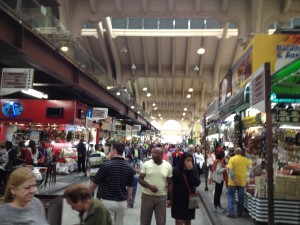 I’m fortunate to have traveled to Brazil a couple of times a year for the last decade.  The country is amazing; the physical beauty of the Amazon, the luxurious beaches of Rio, the splendor of Carnival and the warmth and joy of its people.  During my trips, I’ve seen an incredible transformation.  The country has enjoyed tremendous economic progress over the last 20 years thanks to the reforms of Presidents Cardoso, Lula and Dilma, although there is still plenty of need for additional reforms.  Within this dynamic environment, I’ve had the opportunity to witness entrepreneurship first hand, working with Endeavor (a non-profit that transforms economies by working with high-impact entrepreneurs), SEBRAE (Brazilian Micro-Enterprise and Small Business Support Service – a quasi-government agency similar to our Small Business Administration), and my academic colleagues from leading universities like FGV and Insper amongst others.

Brazil is entrepreneurial.  One in six adults is either trying to launch a business or is the owner of a new venture less than 42 months old and another one in six is running a more established venture.  That 30% of the population is quite a bit higher than the 22% here in the US.  During my work in Brazil, I’ve noticed a few things that make the entrepreneurial environment particularly exciting and some obstacles that are holding back this powerful engine.

1. Pent-up demand.  Brazil has enjoyed robust growth and a rise in living standards.  Although income inequity is still shockingly high, all socio-economic classes have benefited from robust growth.  The Gini index, which measures inequality, has declined from 64 in 1989 to 56 in 2009 where an index of 0 means perfect equality (the US Gini index was 45 in in 2009).  Contributing to the lower Gini index are lower unemployment, increasing minimum wage and Bolsa Familia (a government program that pays poor families to keep their children in school).  As such, Brazilians are consuming more at all socio-economic levels.  I’ve frequented favelas (slums) in Rio and over the last 10 years, I’ve seen more entrepreneurs selling more discretionary items to their customers.  It is now common to see satellite TVs in the favela homes.

2. What do Brazilians want?  Pretty much what consumers in the US want.  This means that many Brazilian entrepreneurs look to successful business models in the US and attempt to replicate them in Brazil.  E-commerce is a case in point.  As the middle class grows, so does on-line shopping.  Need something for you baby, go to www.baby.com.br.  Looking to score some great deals like Groupon, go tohttp://www.peixeurbano.com.br.   And while www.orkut.com.br was originally started in Silicon Valley, it was run by and then based in Brazil.  Up until a few years ago, Orkut was the largest social media site in Brazil, but the behemoth facebook overtook it.  I’ve led a number of VC panels during my visits in Brazil, and Brazilian VCs look at what works in the US and reason that it should also work in Brazil.  While this replication mentality makes sense, I’d also like to see Brazilian entrepreneurs pursue more innovative opportunities.

3. Despite the entrepreneurial opportunities, institutional barriers hamper the entrepreneurial engine.  According to the World Bank, Brazil ranks 121 out of 185 countries in ease of starting a new business.  For instance, it takes 13 procedures and 119 days versus 6 procedures and 6 days in the US.  Moreover, tax and labor laws are Byzantine and punitive.  The World Bank ranks Brazil 156 out of 180 countries in ease of paying taxes and it takes 2600 hours per year to do so.  While we complain about US taxes, we are ranked 69th and it takes us 175 hours per year.   Labor has so much power and courts are so friendly to labor, one of my friends basically had to close down his business when a waitress sued him for a larger share of the tips.  As such, the Brazilian economy is heavily driven by theinformal sector which accounts for 40% of GNP versus 9% in the US (world average is 33%).   While operating in the informal economy helps entrepreneurs avoid taxes and labor laws, it also limits the size that the business can grow and therefore the return that the entrepreneur and society can generate from the business.

Brazil has come a long way from the hyper-inflation of the 1980’s.  The country is growing, it is gaining broader international recognition, it will host the 2014 World Cup and the 2016 Olympics leading to further opportunity.  The future is bright and if Brazil continues to reduce barriers, entrepreneurship can be an engine to maintain the momentum the country has experienced.